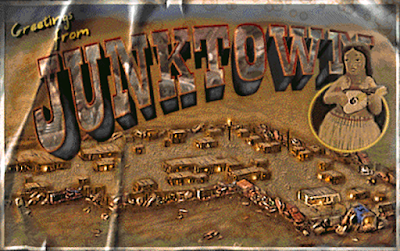 I've posted before about bringing new players into existing games, and once again after finding myself at the whims of opposing schedules, I've found myself introducing a new player into a weekly gaming group. This time we welcome Cubbie in as Minnie, the aged ex-madame and no-shit taker.
Somehow my love for Fallout (apparently a shared love) has immunized me to the pitfalls of the unfamiliar player and allowed a solid (if short) session to come through.
This time, the party crosses paths briefly with a wasteland superpower and arrive in Junktown by way of a very truncated travel time. Alliances are made, foes are created, and new love blooms in this week's episode of Savage Fallout.

You can download the episode here.
Posted by David Schimpff at 7:55 PM 2 comments:

Occasionally I go back through my old blog posts for nostalgia's sake, and in those moments I come across campaign or setting ideas that I've done and forgot about, or done and continuously thought about re-doing or actually figuring out how to write a source book for, but never actually engaging in. Sometimes I even find myself pondering how I'd make a certain world work a bit differently than I originally envisioned, because the basic concept of it had either holes in its logic or lore. The one setting I find myself returning to again and again is one I dubbed The Wrong Side of Everything or, as I pitched to my good friend Susan, Dino Poacher RPG.

There was quite a kitchen sink of material I included in the setting, replete with hovercraft, actual dinosaurs, a world bombarded by solar radiation (and occasionally blacked out by solar flares), a virulent and pervasive disease, and a nebulous authority group I dubbed the 'Nicks, as a sort of allusion to a throwaway line from Pitch Black about a mercenary posing as a lawman with a "nickel-slick badge."

The setting was in a post-apocalyptic Earth, but as I figured out more and more of the world, I started to wonder if good old Terra was the best setting for the kinds of hazards I was throwing out. It had some of the appeal of walking through the ruins of previous civilizations, but the game that I ended up running had very little to do with those abandoned cities, and more to do with the scrap towns that sprang up in places with either abundant natural resources of in locations that made sense aesthetically.

There's also the fact that I am absolutely nuts for sci-fi gaming, and I've also been kicking around the idea of a Lost Planet-style setting where humans dwell underground and survive off geothermal energy, while needing to scavenge the surface for...as of yet undefined reasons.

What I want to absolutely avoid, at least in the beginning, is the ability for players to travel through space. With all this in mind, I'm thinking my next (well, first) actual writing project is going to be called Analog, and the overarching premise will be the launching of one-way colonization ships to planets that have been determined to be Earth-Like (Think Interstellar without Matthew McConaughey's investigative ship, I guess. I still haven't seen Interstellar.)

Hopefully I follow through on this, but really, when have I ever done that?
Posted by David Schimpff at 3:36 PM 3 comments: 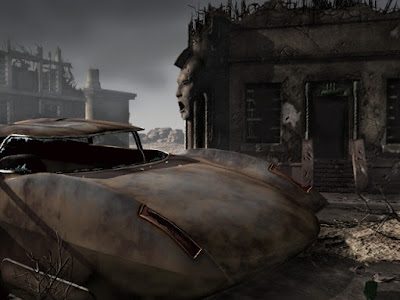 So tonight we tested out some Mass Combat rules, seeing as we were down two players. Everything went pretty smoothly, though it was less interesting for the players themselves, seeing as they weren't leading the battle. However, the combat ended much more swiftly than it would have under standard rules, which gave some time to do some exploring and roleplaying. Apologies for the short episode; next one should be the proper length.

Also to note, the players have now just realized exactly what kind of scale of game they are going to be playing. And they still don't know the half of it. Should be fun.

You can download the episode here.
Posted by David Schimpff at 6:04 PM 2 comments: 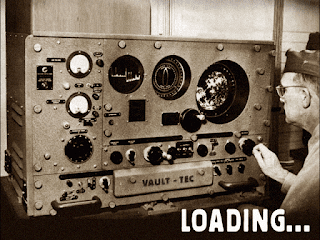 I've always been a bit nervous about bringing new players to the table, but tonight's game went off without a hitch. The takeaway from this game is that I've allowed my players to become something violent and blasphemous, and even their previous failures haven't taught them that jumping right to the bloodshed isn't always the correct choice.

In either case, shit gets burned down, Chekhov's Gun has been fired, and the people of Shady Sands have taken their first step towards their inevitable fate.

You can download the episode here (right click, Save As)
Posted by David Schimpff at 9:55 AM 3 comments: 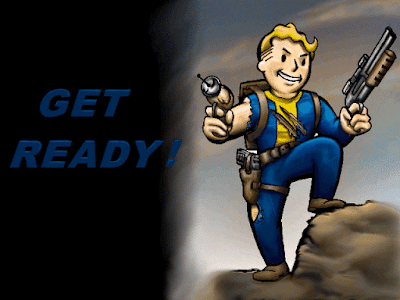 It was really only a matter of time before my players got back to their old mercenary ways; I suppose it's a bit too much of a stretch for them to play any kind of role even resembling a white knight. People in RPGs always seem to want payment for their actions, especially if they're the ones coming up with all the dialogue.

I did get some good opportunities to create some foreshadowing for my players this week, however, but telling you how would be spoiling the fun for my group, which occasionally reads this blog. Veteran Fallout players will recognize it, though!

You can download the episode here (right click, Save As).
Posted by David Schimpff at 11:03 PM 2 comments:

Well folks, here we are with the third session, our players are fully immersed in the wonderful world of Fallout, and their quest to save Vault 13 just got a lot harder.

It seems like my players are picking up the Savage Worlds ruleset a lot faster than I expected, and they are simply trouncing everything I'm throwing at them, which is nice for the flow of the game, but I'm really thinking I'm going to need to come up with something to challenge them and add some tension, or they're going to eat each other alive.

Regardless, we're about to get into the meat of the story of Fallout 1, so I'm super excited for the next few weeks, and I hope you all are, too!

You can download the episode here (right click, Save As).
Posted by David Schimpff at 11:03 PM 2 comments:

Hey everyone! Many thanks to long-time Esoteric Order of Roleplayers listener Miika for suggesting I do something productive with my Memorial day and actually learn about this crazy RSS thing.

Which I did. So I've got a feed now. And six subscribers, apparently!

Also, big thanks to the Esoteric Order for linking me yet again this week, I've officially passed 10k pageviews, and thusly will begin attempting in earnest to keep up with my Actual Plays.

In any case, if you're reading this, you've probably contributed to those views referenced above, so thanks for checking out Crit This!